The one-acre water body, officials said, has already begun to replenish the region’s groundwater reserves, which depleted by at least 1.5 metres between 2019 and 2020, as per data from the district agriculture department.

“The pond will recharge groundwater every month by up to 3000 kilo litres a day (KLD). It has a depth of 15 feet. It’s mostly empty now, but that is because we have desilted the bed and water is percolating at the site much faster than we anticipated. It will take at least a year for a permanent water body to form,” said Yasin Khan, a civil engineer working with Gurujal, which is tasked with implementing the Centre’s Jal Shakti Abhiyan in Gurugram. .

Situated about 40kms from Gurugram, and located on the outskirts of the village, the site is the lowest lying area of Mojabad village.

“We have some 250 odd homes and 1600 people. Waste water from the homes used to accumulate here (at the pond site). It had become one large, open sewer though everyone in the village remembers that there was a pond here once,” said Keshu Ram, sarpanch, Mojabad.

Fixing the issue started with draining the sewage, de-silting it and finally levelling the bed to better retain incoming water. “We constructed a 100 KLD sewage treatment plant (STP, to treat local sewage) which is dispensing recycled water here daily. Just adjacent to the pond is a temple area which we have developed for use as public space,” said Anjali Singh, associate community mobiliser, Gurujal.

Seeing as Mojabad also suffers from erratic power supply, which would hinder the functioning of a standard electromechanic sewage treatment plant, officials opted for a ‘bio-STP’, which relies on phytoremediation and gravity to treat wastewater. “There are no chemicals or pumps involved. The sewers bring all the water to this low lying area, and it is treated by filtering through the root systems of plants before percolating down under the influence of gravity,” Khan explained, adding that this technology would also be deployed in at least two other villages where pond revival projects are in the works, including Palasoli and Dhaula villages in the district.

In all, under the Gurujal initiative, a total of 72 water bodies identified across Gurugram are slated to be restored in a similar manner. “Work is presently underway at 15 other sites, including Kasan, Khentawas, Dhaula, Wazirpur, Navada and Dharampur villages. Mojabad is the smallest of these projects, while Kasan is the largest, in terms of scale. Most other ponds will be revived using traditional STPs with larger capacities, of about 250KLD,” said Shubhi Kesarwani, programme manager, Gurujal.

Snapshots of the event : 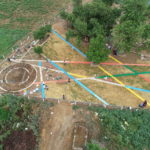 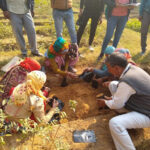 Next:
Training Program for Nursery Development